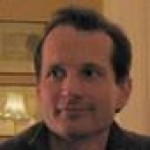 Jon Ippolito is an artist, writer and curator born in Berkeley, California in 1962 who turned to making art after failing as an astrophysicist. After applying for what he thought was a position as a museum guard, Jon was hired in the curatorial department of the Guggenheim, New York, where in 1993 he curated Virtual Reality: An Emerging Medium and subsequent exhibitions that explore the intersection of contemporary art and new media. In 2002 Jon joined the faculty of the University of Maine's New Media Department, where with Joline Blais he co-founded Still Water, a lab devoted to studying and building creative networks. His writing on the cultural and aesthetic implications of new media has appeared in The Washington Post, Art Journal and numerous art magazines. More at three.org/ippolito.